HomeBlogs Is kratom legal In Portland? 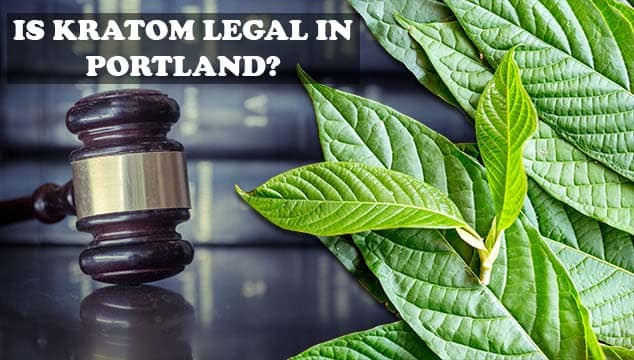 Portland is the largest city in Oregon, and when it comes to kratom laws in the city, they are pretty similar to the state laws. The herb is legal in the city, but there have been several efforts targeted to ban it nationwide. If you intend to travel to Portland or have recently shifted here, there might be new things about the south Asian herb that you might want to know.

If you were looking for the simplest yet comprehensive guide on the legal status of kratom Portland, you have landed at the right place. In this article, we will tell you all the relevant information about kratom legality in Portland, Oregon, its history, and future laws.

Can You Enjoy Kratom In The Streets Of Portland?

Kratom is completely legal in Portland, and therefore anyone in the city’s premises can wholeheartedly enjoy it wherever he wants. However, this was not always like this. Following the efforts of the Food and Drug Administration (FDA) to ban kratom on a federal level, the Oregon lawmakers presented a bill for Oregon Senate Bill 518 in 2017.

The main purpose of the legislation was to direct the State Board of Pharmacy to conduct a study to determine whether plant mitragyna speciosa and drug derivatives of the plant should be scheduled as controlled substances. Several members of the American Kratom Association were surprised by the purpose of the bill. The bill, however, failed to pass, and kratom’s legal status remained conserved in the state.

Then later in 2018, lawmakers found two people in the neighboring cities of Portland that were affected by the salmonella-infected strains of kratom. Taking advantage of this situation without a complete investigation, officials started warning people against using kratom. A year after the incident occurred, state officials finally decided to label and regulate kratom products.

In April of the same year, the Senate Judiciary Committee amended a series of rules and restrictions on kratom into an unrelated bill. In reference to the bill, it would be necessary to regulate the production, testing, and labeling of kratom, and its sales would be limited to individuals 0f age 21 or above.

However, the Joint Ways and Means Committee reversed the earlier action. It removed all references to kratom in the bill because Kratom proponents favored the Kratom Consumer Protection Act (KCPA).

Are There Any Laws That Regulate Kratom In Portland?

A majority of kratom consumers support the Kratom Consumer Protection Act, whose legislation is enforced by the American Kratom Association. Its main aim is to keep kratom accessible yet resulting in it making it safer for the consumers. Lawmakers have tried to regulate the herb but in vain.

For instance, in 2020, Republican Bill Post and three democrat representatives, Brian Clem, Jeff Barker, and Rachel Prusak sponsored KCPA in the senate as Oregon House Bill 4013; however, the bill failed to pass.

Then again, in 2021, the 11 Republicans and 4 Democrats sponsored Oregon House Bill 2646 to regulate kratom once again. The house successfully passed the bill, but later Oregon Governor Kate Brown vetoed it along with another Senate bill on mental health oversight and claimed that this venture should be managed by FDA and not DEA.

Consequently, the herb remained legal but unregulated throughout Oregon, including Portland.

Are There Any Risks Of Future Kratom Bans In Portland?

Currently, there are no talks of banning kratom in the city. As the main hub of Oregon, the laws in Portland are greatly influenced by state laws, and the same is true for kratom legislation. As long as there is no change in the legal status of the herb at the state level, consumers can sleep peacefully, knowing they will not find any difficulty in finding their favorite strain.

However, there has been great tension among the FDA officials regarding the legality of the herb, and that is why any and everything at the federal level ultimately impacts the legality of kratom in every state. As of 2020 the World Health Organization said that kratom should not be seen as a threat. WHO Executive Committee on Drug Dependency stated, “The Committee concluded that there is insufficient evidence to recommend a critical review of kratom.”

This has a very promising effect on the future of kratom in the US as it suggests that there should be no one unless there is complete research and enough evidence against the herb.

Which Is The Most Popular Kratom Product In Portland?

There are many kratom products that the residents of Portland widely consume. A large number of offline and online kratom vendor in the city indicate high kratom sales. This is enough to suggest that the plant is highly popular in the city. Furthermore, unofficial data collected from a number of vendors in the city suggest that citizens are more inclined toward kratom powder of all products.

Though the sales of other products, including the kratom capsules, were pretty much closer, the powder came out to be the most popular product. It is due to a number of reasons. Of all the other products, you get the most options in terms of strain with powder. In addition, it is fairly cheap and available at almost all vendors. Finally, in the case of powder, you see, smell, and touch what you are eating, and this avoids any contamination.

According to the consumers, these were some of the reasons why they prefer to go for powder.

Some Authentic Kratom Stores In Portland

After knowing that kratom is legal in Portland, it is time to know where to head to find the most quality products. If you are in a hurry, you can go to a nearby location and look for a smoke shop, vape store, convenience store, or gas station. However, it is not recommended to shop just from anywhere until you are fully sure they sell quality products.

There have been many incidents where a hasty purchase turned into a nightmare. Therefore, we have jotted a list of the most popular vendors based on consumer reviews and ratings.

Their staff is generous and well informed to guide you on everything about your sale. In addition to that, they sell all varieties of kratom at incredibly reasonable prices. They are located at 3029 SE Division St Suite b.

Herb Stomp has two locations in Portland. One is located at 3901 SE Belmont St and the other at 5700 NE Sandy Blvd. They sell a wide range of kratom products along with many other items.

They also enjoy good reviews from their customers and sell all three strains of the herb.

It is a luxury store that sells several products and, of course, kratom. The prices are fairly higher than the average stores, but their customers are fully satisfied with their services.

What Is The Best E-commerce Kratom Business In Portland?

Even if you have a bunch of retailers in the vicinity, kratom experts always recommend buying online. It is because online stores have a larger variety of strains. They are solely dedicated to selling kratom. That is why they specialize in what they do. You get better information regarding your purchase.

In addition, when buying through an e-commerce website, you can buy in bulk, which effectively reduces the cost. You can also avail of discounts and sale offers, giving you greater benefits than you can enjoy by buying from stores. But here again, you don’t entertain all these perks if you are not purchasing from a consistent vendor. Therefore, to make it easy for you, we have listed a list of reliable vendors that ship to Portland below.

All of these vendors have an easy-to-navigate e-commerce website that you can explore, compare prices and shipping costs and get all the information you need.

Kratom is legal in Portland, which means you can easily sell, buy, consume, manufacture and import the herb in the city. There have been several efforts, first to ban and then to regulate the herb, but both fail to come into action. However, if you are planning to travel to another city or state from Portland, you should confirm with your air company before carrying the herb. wIn addition, kratom is not regulated federally, which is why its legal status in any state or city is not constant. This requires every consumer to stay in touch with the latest updates and news regarding the legality of the herb.

Previous post How Many Kratom Capsules Should I Take
Next post Is Kratom legal in Little Rock?